Posted on August 1, 2020 by Stephen Sorensen 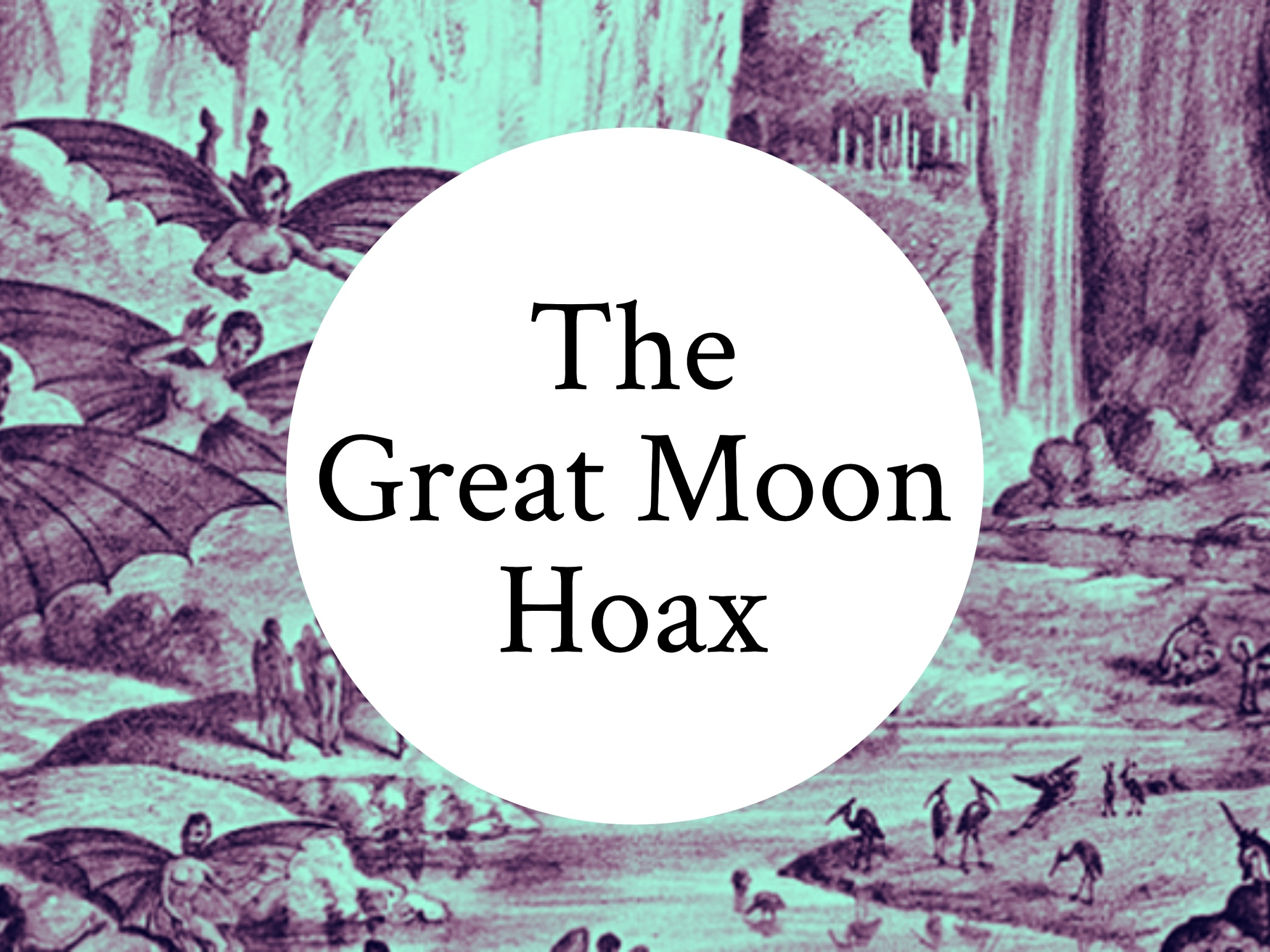 “…one of the most imaginative newspaper hoaxes of all time, which, through a remarkable blend of early science fiction and a well conceived practical joke, tricked hundreds of thousands of readers in and outside of the United States and made a small New York-based penny paper the top-selling newspaper in the world.” – István Kornél Vida (2012) [1, p.431]

The Great Moon Hoax took place in 1835 and was conducted by the Cambridge graduate Richard Adam Locke (1800-1871) [1, p.431]. The newspaper publisher which he used for his hoax was The Sun, which was established in 1833 [2]. The Sun was being outsold by its competitors and the pressure was felt by Benjamin H. Day, The Sun‘s publisher. Him and Locke conspired to attract the attention of a wider audience in order to keep up with their rival newspapers. In the end, the plot to increase their wealth and viewership was a success.

The hoax gets its name from the story they published in 6 segments over the course of 10 days supposedly containing news about the astronomer Sir John Herschel’s spectacular discoveries on the surface of the moon.

The first article of the collection was published on August 21, 1835 and was titled “Celestial Discoveries”. Credit was given to the Edinburgh Journal of Science, which had been closed for 2 years, for publishing the astronomer’s research. The report stated that Herschel, using a new state-of-the-art telescope, “had already made the most extraordinary discoveries in every planet of our solar system; had discovered planets in other solar systems; [and] had obtained a distinct view of objects in the moon”. Locke did what he could to build the credibility of the story by giving a description of Herschel’s work, Herschel’s expedition, and the telescope. Locke reported that Herschel had determined whether or not the moon was inhabited, but didn’t say anything more on that in this publication [1, p.432].

The second article began by going into more detail about Herschel’s expedition, and included the disclosure of plant and animal life discovered on the moon’s surface.

On the third day, a species of biped beaver was discovered. “It carried its young in its arms like a human being, and its huts were constructed higher and better than those of many human savages” [1, p.433]. These beaver-like creatures were also familiar with using fire, as could be seen from the smoke pouring out of their huts.

On the fourth day the interest of the readers peaked with the description of human-like aliens spotted in the moon’s “Ruby Colosseum” valley. The report stated, “They averaged four feet in height, were covered, except on the face, with short and glossy copper-colored hair, and had wings composed of a thin membrane, without hair, lying snugly on their backs, from the top of their shoulders to the calves of their legs. The face, which was of a yellowish flesh color, was a slight improvement upon that of the large orang outang, being more open and intelligent in its expression, and having a much greater expansion of the forehead. The mouth, however, was very prominent, though somewhat relieved by a thick beard upon the lower jaw, and by lips far more human than those of any species of simia genus.” [1, p.433-4]

Herschel named these aliens Vespertilio-homo (man-bat). He noted that they were rational creatures that were capable of conversation, but also that they would mate in public.

On the fifth day the story reported the discovery of a temple which seemed to depict evidence of a past, or possibly future, catastrophe. The mystery of what was being depicted was meant to keep the attention of the readers. Given that the fourth day’s news was massive, Locke needed something new to keep his audience locked in.

The final piece to the story was published on August 31, 1835. It included the discovery of a larger race of the “bat-people”, which was concluded to be a superior variety. The astronomers observing these aliens determined that there was a “universal state of amity among all classes of lunar creatures” [1, p.435].

The story was ended with a report that the telescope had caused a fire in the laboratory which took about a week to repair. By the time that the laboratory was restored to a functional state, it was no longer possible to observe the moon.

This hoax resulted in The Sun becoming “the top-selling daily paper in the world”. The Sun sold about 19,360 papers a day because of this hoax, in contrast to The London Times selling about 17,000 a day. Both American and European papers fell for it and commented on it, such as The New York Times, The New Yorker, and The Daily Advertiser.

It was so sensational that Edgar Allen Poe commented on it, saying:

“Not one person in ten discredited it, and (strangest point of all!) the doubters were chiefly those who doubted without being able to say why — the ignorant, those uninformed in astronomy, people who would not believe because the thing was so novel, so entirely out of the usual way. A grave professor of mathematics in Virginia College told me seriously that he had no doubt of the truth of the whole affair!”

“Yale College was alive with staunch supporters. The literati — students and professors, doctors in divinity and law — and all the rest of the reading community, looked daily for the arrival of the New York mail with unexampled avidity and implicit faith. Have you seen the accounts of Sir John Herschel’s wonderful discoveries? Have you read The Sun? Have you heard the news of the man in the Moon? These were the questions that met you every where. It was the absorbing topic of the day. Nobody expressed or entertained a doubt as to the truth of the story.” [1, p.436]

The story became popular among a number of people. There were missionary trips being planned by some religious groups to spread the Gospel to these bat-people moon creatures. One clergyman had asked his congregation for money to buy Bibles to deliver to the aliens. Multiple meetings were held in London at Exeter Hall by the philanthropist society in England to discuss “relieving the wants of the people of the Moon, and, above all, abolishing slavery if it should be found to exist among the lunar inhabitants”.

Over the following month, suspicion about the credibility of the story was rising. The Sun denied that the complete story was a hoax and Locke denied being its author. Locke however did tell his friends prior to the 10 day publication event that “If the story be either received as a veritable account, or rejected as a hoax, it is quite evident that it is an abortive satire; and, in either case, I am the best self-hoaxed man in the whole community” [1, p.437].

Locke’s story has gone down in history as one of the most infamous hoaxes.

← Historical Method
How To Do Provenance Research →