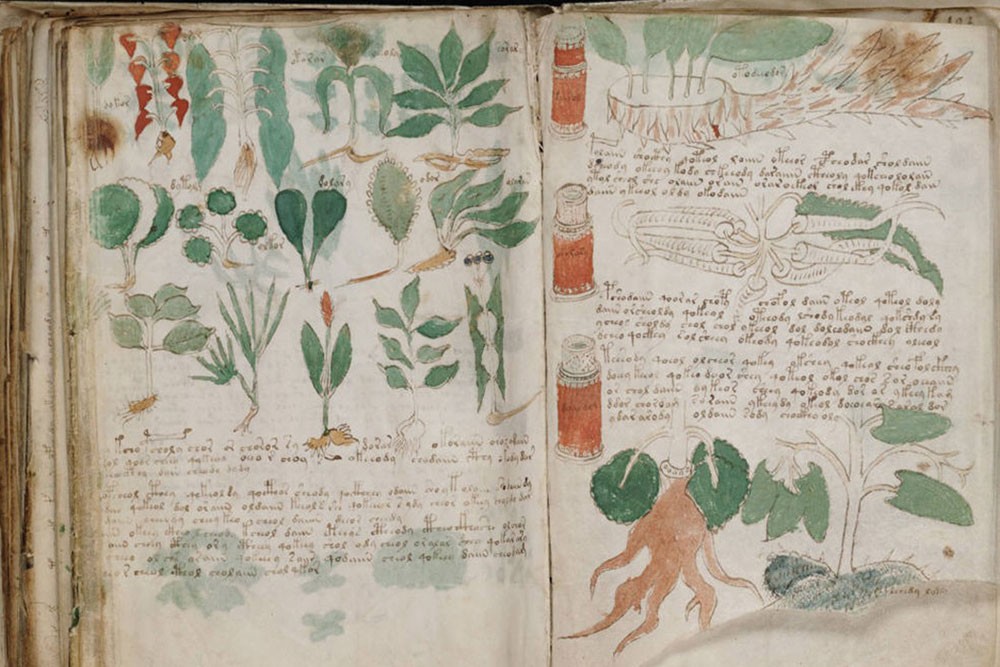 “[the] most mysterious manuscript in the world” – Professor John M. Manley (1921)

I’m not sure if there is any other manuscript which is more infamous for the mystery which surrounds their contents than the Voynich Manuscript. The Voynich Manuscript is currently being held at the Beinecke Library as MS 408. It appears to be a scientific manuscript containing 102 vellum leaves. It is illustrated with around “400 botanical, 42 biological, 33 astrological or astronomical drawings, and 350 single star figures, all in varied shades of green, brown, yellow, blue, and red” [4, p.347].

The collector of old manuscripts, Wilfrid M. Voynich, from whom the manuscript takes it name, discovered it in a castle in southern Europe in 1912. Voynich reported in 1921 that “even a necessarily brief examination of the vellum upon which it was written, calligraphy, the drawings and the pigments suggested to me as the date of its origins the latter part of the thirteenth century”.

Voynich also reported in 1921 that “the history of this manuscript so far as at present can be ascertained or reasonably conjectured , we must conclude that it rested in some monastery in England, where Roger Bacon’s manuscripts remained until the dissolution of the religious houses in the sixteenth century. At that time, together with other treasures from these disbanded libraries, it probably passed into the hands of one of the receivers of this spoil, the Duke of Northumberland. It was very likely one of the manuscripts probably found in this family’s possession by John Dee, who certainly early in his career obtained a collection of Bacon manuscripts. During one of his visits to Prague, Dee undoubtedly presented it to Emperor Rudolph II, from whose possession it passed into the hands of Jacobus de Tepenecz not earlier than 1608. The manuscript then passed into the possession of a person whose name is at present unknown but who is known to have bequeathed it to Marcus Marci. It was given by Marci, in 1665 (or 1666), to Athanasius Kircher. Its subsequent history becomes again conjectural, and we may suppose that it was presented by Kircher to a patron in one of the ruling houses of Italy, after which it remained buried until it was discovered by me in 1912”.

Its authorship has been attributed to Anthony Askham [1, p.898] and Roger Bacon [3, p.546]. There is still a debate about who the true author of the manuscript was.

Strong reported (1947) that the manuscript is “coded in a double reverse system of arithmetic progressions of a multiple alphabet”. He also reports that plants were the main source of medicinal products in the 16th century. He suggests that Askham based the manuscript upon contemporary local medicinal remedies.

O’Neill reported (1944) that he and six botanists concluded that there was a sunflower (Helianthus annuus L) on folio 93. The sunflower was brought to Europe in 1493 in the form of seeds from the Americas. This means that the manuscript would have to have been created after 1493, unless there was some evidence to show that the sunflower was in Europe prior to the voyages of Columbus.

O’Neill also reported that there is another plant from the Americas, namely Capsicum, on f.101.

Brumbaugh reported (1974) that the author of the manuscript not only made it difficult to decode the text by misspelling words and using a pseudo-Latin, but also that the plants were distorted to make identifying them more difficult. He noted that red peppers were colored green on f.100r and f.100v. Through his deciphering of the manuscript, he found the word pepper next to the plants on those folios.

Category: Article of the Month

← Historical Sources for Jesus Christ
The Backstory to my Response to Philipp Druzhinin, the Mud Flood Researcher →