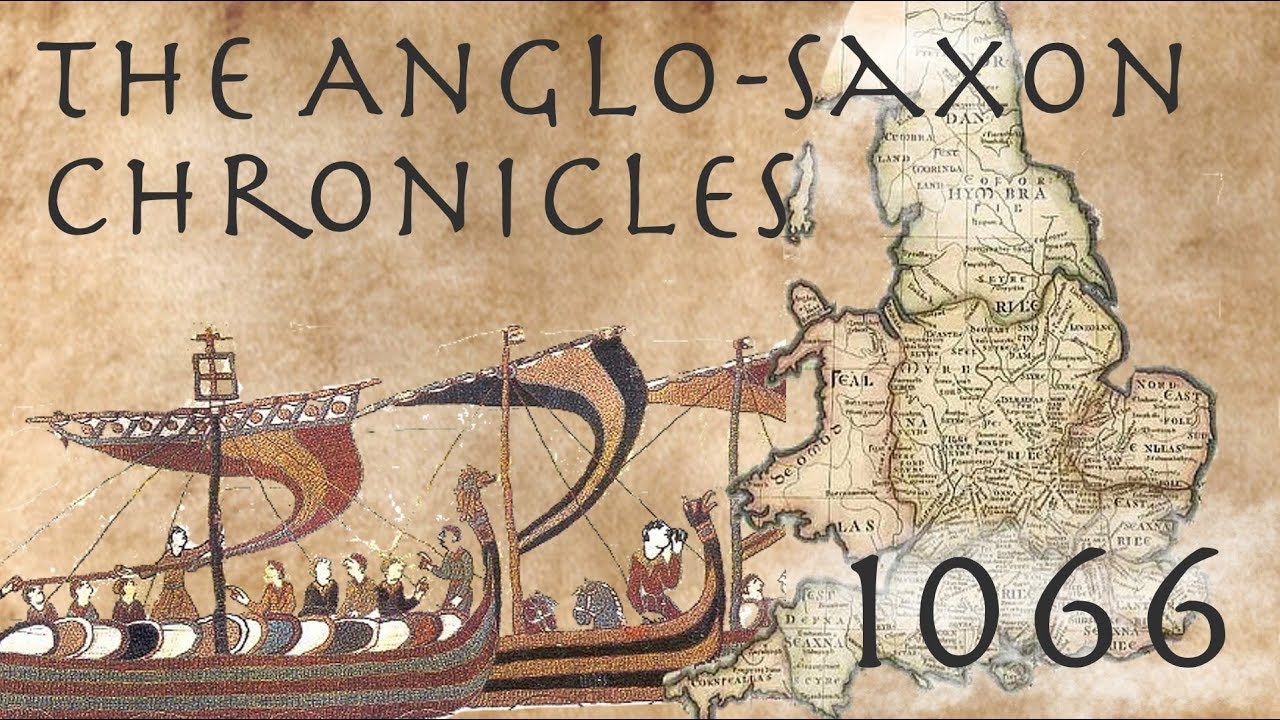 The primary book which influenced the writing of this article is A.T. Fomenko’s ‘The Issue with British History’ [0]. His primary source in his book is labeled as [1442] and is “‘The Anglo-Saxon Chronicle’. London: Everyman’s library, J. M. Dent. Sons Ltd., 1990”. I have not found this book online for free so I am going to be using the 1912 Everyman Press edition, ’The Anglo-Saxon Chronicle’ [1]. Fomenko only lists 6 of the 9 fragments found in [1] and claims that historians believe these fragments are all copies based on one original manuscript, which is supported by [1].

A brief history of English historians

The primary source [1] for my article claims that there are two unparalleled manuscripts that contain information about early English history. These two manuscripts are known today as, the Record of Doomsday and the “(Anglo-)Saxon Chronicle”. The author of [1] also claims that aside from the books of the Old Testament, the ASC is the greatest phenomenon in the history of mankind. [1] claims that the ASC is the “primeval source from which all subsequent historians of English affairs have principally derived their materials.”

According to [1], the most ancient English historian is not Merlin (5th-6th cc.), but Gildas (c.500-570). The author mentions he does not consider Joseph of Arimathea (1st century AD), Arviragus (1st century AD), Bonduca (?), or Emperor Constantine (272-337AD) to be “among the illustrious writers of Great Britain”. Some parts were allegedly transcribed by Venerable Bede (c.672-735).

The second mention-worthy historian noted by [1] is Nennius (7th century? 9th century?). Nennius is allegedly the self-proclaimed first historiographer of the Britons. However, he sometimes copies word for word the work of Gildas. Nennius’ only work that I am aware of is titled ‘Historia Brittonum’. His work allegedly contains tales about Trojan antiquity, miracles of Saint Germain and Saint Patrick, and many more. [1] claims that Nennius’ work was “revived in all its glory” by Geoffrey of Monmouth (c.1095-1155).

The third writer he praises is Venerable Bede (c.672-735). He is sometimes called “The Father of English History”. He is believed to have popularized the Anno Domini dating (in the year of our Lord). However, this practice did not become common until the alleged 11th-14th centuries.

The fourth writer mentioned is Bishop Asser (died c.909). He is the alleged author of ‘Life of King Alfred’, a biography of King Alfred. This manuscript survived in a single copy that was destroyed in 1731 in a blaze. The present work has been reconstructed from transcriptions and other sources. This is the primary source document for our knowledge about King Alfred.

The fifth writer is Æthelweard (died c.998). He is considered by [1] to be “…the most faithful and extraordinary follower of the Saxon Annals…”. He is believed to be the author of a Latin translation of a now lost Anglo-Saxon Chronicle. The only surviving copy of this work was printed in 1596 and got severely damaged in the 1731 Cotton Library Fire. It is now held in the British Library.

The author of [1] mentions five important names to know when it comes to the Anglo-Saxon Chronicle. These five names in a concise list are as follows:

Given that the manuscript contains information about events which allegedly took place between 60BC and 1153AD, there is a gap of about 560 years between the first event and the first writer being born. The first compiler of the manuscripts was allegedly born some 930 odd years after the first recorded event.

Other important names of people who lived until the end of the creation of the ASC are:

It (1) claims that the ASC was originally compiled on the orders of King Alfred the Great around 890AD. This compilation is allegedly orchestrated under Æthelweard (died c.998). The chronicle was maintained and added to until the mid-12th century. The 9 fragments all contain variations of the original manuscript. Sometimes these variation are quite significant.

The 9 Anglo-Saxon Chronicle fragments listed in [1]:

B – The Abingdon Chronicle I (British Museum, Cotton MS. Otho B xi, 2)

The 6 Anglo-Saxon Chronicle fragments listed in [0]:

Manuscript A – The Parker Chronicle – allegedly contains events from 60BC-1070AD

*I think [0] leaves out [1]’s A and H because they are only fragments. I don’t know why he leaves out the [1]’s “I”. Possibly his own source only listed 6 instead of 9. One reason may be that [1]’s A-Prime is in the same MS as A, hence the two might be considered one (also possibly the fragment reason explains the lack of inclusion).

The first attempt at printing the Anglo-Saxon Chronicle fragments was around 1644 by Professor Wheloc. The second attempt was published in 1692 by Edmund Gibson. That second printing contained around four times as much content as the first, but still was still far from containing the complete collection of the ASC. The first literal version was finished in 1819. G. N. Garmonsway informs us that every modern analysis of the Anglo-Saxon Chronicle is normally based on John Earle’s 1865 revision which was published by Charles Plummer between 1892 and 1899.

On page 12 of [1], you find the author stating that almost all material which today helps us gain a “correct” knowledge of general English history may traced to the ASC. He continues his book by beginning to examine the “probable” authors of the Annals. He makes an emphasis on the probably because, to quote his words exactly, “we have very little more than rational conjecture to guide us”. Prior to Venerable Bede’s endeavors, the written history did not stretch far beyond chronological tables of events, genealogies, information on kings’ deaths and successions, and other distinguished people. The Saxon bishops, abbots, and others greatly assisted Bede with his writings by providing him with written materials and traditionary facts “viva voce” (through speech instead of writing).

Bede allegedly has left us with the names of some of the people who helped him with his works. The first name the author lists is Alcuin/Alcuinus/Albinus, Flaccus (c.740-804) [7]. The second person the author lists as being mentioned by Bede is also allegedly the first person on record in the province of Kent, Tobias, the 9th bishop of Rochester. The author mentions that Bertwald (Berhtwald/Brihtwald/Beorhtweald/Berthwald/Beorhtwald/Beretuald), the 9th archbishop of Canterbury, died 731) [8] is the first English, or Saxon, archbishop of Canterbury. He mentions two other archbishops, being Dunstan (909-988) and Aelfric (died 1005), who played roles in composing the ASC as we know it today.

I may write an article on the origins of Bede, but for now I will note that I find it odd he supposedly lived in the 7th-8th centuries and people were allegedly moving his remains still in the later part of what’s considered the 14th century.

When were the Anglo-Saxon Chronicle manuscripts written?

Note that ‘A – The Parker Chronicle’ and ‘E – The Laud (Peterborough) Chronicle’ both bear the names of archbishops from the 16th century (Archbishops Parker and Laud). Another note is that Manuscripts B, C, D, F, H, and I are all from Sir Robert Cotton’s collection (1570-1631). Hence, all the manuscripts are closely associated with 16th-17th century figures.

The ASC is believed to be the first historical document written in English which uses the “Years of Grace” dating, presumably the equivalent of the mediaeval English “Years from the Incarnation of Our Lord” or Anno Domini.

The author of [1] mentions the importance of the writings of Nennius (7th/9th century?). In the following paragraph, we focus on Nennius’ History of the Brits.

The primary source Fomenko uses for the discussion of Nennius is in his book [0] marked as [577], “Nennius. ‘History of the Brits.’ From: Geoffrey of Monmouth. ‘History of the Brits. The Life of Merlin.’ Moscow, Nauka, 1984. English edition: Nennius. ‘Historia Brittonum.’ Galfridus Monemutensis (Geoffrey of Monmouth). ‘Historia Britonum’. ‘Vita Merlini. Six old English Chronicles.’ Edited by J.A. Giles. London, 1848.” Fomenko relays to us the information that Nennius’ ‘History of the Brits’ survives in more than 30 manuscripts. The earliest have been dated to the 9th-10th centuries and the latest from the 13th-14th centuries. It is also noted that the authorship of some of them is attributed to Gildas. It appears to be a compilation, where the original text has not survived. Nennius’ work has two chronological indications; “On the Six Ages of the World”. Fomenko maintains that Nennius’ work may have been created in the 16th-18th centuries. Fomenko also claims Nennius seemingly unknowingly fails to include entire centuries which we today recognize on our current Gregorian timeline.

Another important name mentioned above was Jeffrey of Monmouth, a.k.a. Galfridus Monmutensis (c.1095-1155). Galfridus authored a work which is known to us as Historia Britonum. We focus on this work in the following paragraph.

The primary source Fomenko uses for the discussion of Galfridus is in his book [0] marked as [155], “Galfridus Monmutensis. ‘History of the Brits. The Life of Merlin.’ Moscow, Nauka, 1984. English edition: ‘Histories of the Kings of Britain by Geoffrey of Monmouth.’ Translated by L.A. Paton. London-New York, 1912. See also: Giles, J. A., ed. ‘Six Old English Chronicles.’ London, 1848”. That source informs us on page 196 that Galfridus’ chronicle has been dated from the 1130s/40s. Galfridus’ work is believed to be based on Nennius’ work. So much so as to include the same “mistakes”. To read a copy with a revision by J. A. Giles, check [10] in my references. Another person which Galfridus’ work is believed to be based on his the work of Venerable Bede, namely Bede’s Ecclesiastical History of the Angles. Galfridus is also known for emulating ancient styles. That is to say, copying/imitating them. Galfridus’ works achieved great fame in the Middle Ages. The first printed copy was released in Paris, allegedly 1508. It also contains large gaps in time, similar to Nennius, where he seems not to mind or notice.