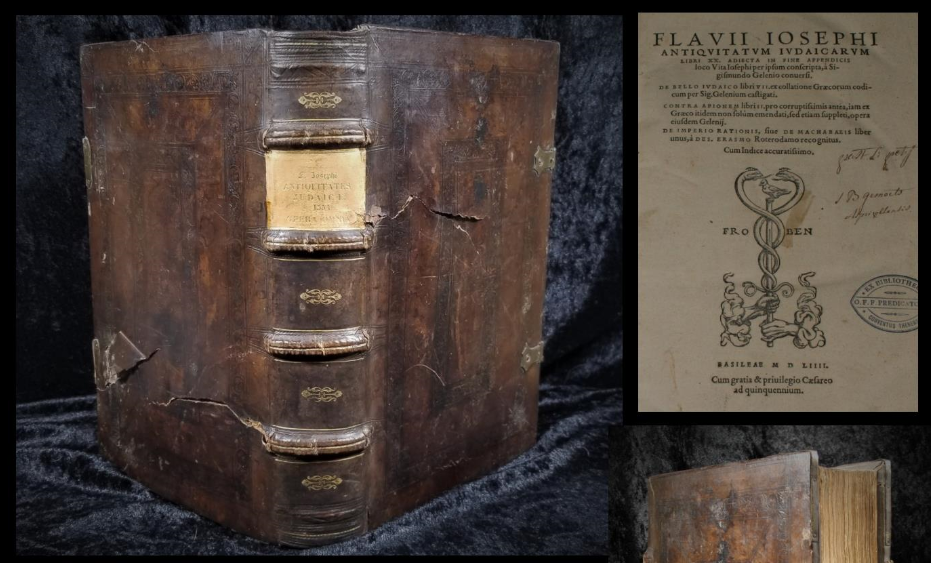 This article contains a list and information on the early printed editions of Josephus.

The most comprehensive list that I have found so far for early printed editions of Josephus begins on page 335 of A Companion to Josephus (2016) by Chapman & Rodgers.[7] I was not familiar with this work when I first published this article. I recommend reading their work if possible.

This is a chronological list of the various editions containing works of Josephus which have been printed. Latin is indicated by (L), Greek by (G). The names of the printer (or printers) is located directly after the language indicator.

“Because the Greek editio princeps was not published until 1544, the at least 24 Latin editions appearing between 1470 and 1540 were the primary way Josephus’s works were known to scholars…”
Levenson & Martin[1, p.765]

“For the Latin MS tradition, they have only the limited reports in Niese’s editio maior, which are based on a small number of witnesses mentioned in his introduction but not associated with specific readings in the critical apparatus.”
Levenson & Martin[1, p.767]

“The Latin translations of Josephus are also important … “the single most copied historical work of the middle ages,” they have a cultural significance matched by few other historical works from Graeco-Roman antiquity.”
Levenson & Martin[1, p.767]

“Clearly the most influential early printed edition of the Latin translations of the AJ and BJ edition is the 1535 Basel, which was followed by all later editions until the 19th century.”
Levenson & Martin[1, p.812]

“Thus the Beinecke Josephus of 1481 was printed in a brief era when the Venetian printing industry was dominated by a virtual monopoly to which Reynaldus was linked by his marriage to Donna Paolo.”
Armstrong[2, p.124]

“A remarkable feature of the Beinecke Josephus is that neither its decorative motifs nor the style of its figures have much in common with Venetian miniature painting around 1480; this tends to confirm the fact that incunables were sometimes decorated in cities other than the one in which they were printed.”
L. Armstrong[2, p.133]

“his work was used, especially in the Middle Ages, as authority on most of the subjects for which classical authors were commonly consulted,”
E. M. Sanford[3, p.127]

“The first edition of the Jewish War was composed in Aramaic to persuade the “barbarians in the interior” to avoid the fate of Jerusalem by faithful submission to Rome,”
E. M. Sanford[3, p.129]

“In the West, printed editions of the Latin versions were soon followed by the Greek text of Froben in 1544, and by many translations into a wide variety of languages. None of these can claim greater popularity or a wider influence than that of William Whiston, published in Dublin in 1736-1741.”
E. M. Sanford[3, p.145]

[1] – Baden, Joel. Sibyls, Scriptures, and Scrolls: John Collins at Seventy (Supplements to the Journal for the Study of Judaism). BRILL, 2016. https://books.google.com/books?id=E9M6DQAAQBAJ&dq=josephus+printed+editions&source=gbs_navlinks_s. Accessed 30 Jul. 2021.